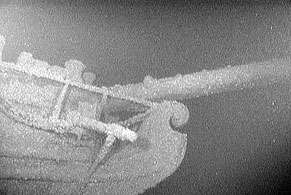 Imagine yourself out to sea with your best buddy. Now imagine looking at a computer monitor for 10 – 12 hours looking for something out of the ordinary.  That’s just what Jim Kennard and Dan Scoville do for their hobby. They basically cruise the water looking for shipwrecks.

It turns out they are quite good at hunting shipwrecks. Over the past 35 years, Kennard has managed to find over 200 shipwrecks. The past 6 years he and Scoville have been partnered up and have invested tens of thousands of dollars in their hobby. Kennard said “It’s a hobby and hobbies can be expensive”. I think that’s an understatement.

The team was on the hunt of their lives. They were in search of a 22 gun warship called the HMS Ontario. They knew the ship was only a few hours into a voyage from Niagra to Rochester when it got caught in a violent storm. Legend has it that the HMS Ontario was carrying a small fortune of gold as a year’s pay for the British garrison.

Over the course of nearly 3 years the team covered 500,000 square kilometers in search of the holy grail of shipwrecks, watching the sonar scanner for anything that might resemble a shipwreck. When the sonar starting showing the resemblance of a ship, the duo was ecstatic. They were pretty sure they had found the Ontario but they couldn’t be sure until they were able to drop a remote-controlled submersible.

Once the weather cleared and the team was able to head back out to their secret location they dropped the sub. What they found was incredible. The Ontario was virtually unscathed, as it was sunk by a rogue wave. The two crows nests are intact on each of the masts. Several of the 22 guns are still in their original locations on the deck and the anchor still in place.

The team is hoping to take a documentary team to the site to capture the ship wreck in all its glory. However, “We’re not saying exactly where it is,” Kennard says. “It’s a British war grave and we want to make sure it remains undisturbed. But it’s nowhere near Oswego.” So with that, the team moves on to their next hunt – hoping and praying it will be as big of a discovery as the Ontario.

I think it’s safe to say that none of us will ever hunt as big a treasure as these two gentlemen.  Hats off to your discovery and a remarkable hobby.

Top 5 Reasons to Dive into a Dumpster Today

Beading: What Beads to Use

The Mysterious World of Metal Detecting

Unlocking the Mysteries of the Best Knitting Needles: An Essential Guide for New Knitters