Bonsai means “tree in a pot” (or tray) in Japanese, and refers to growing trees in small pots in such a way as to look old, interesting and artistic. The art is believed to have originated in China thousands of years ago, and is now practiced all over the world, e.g. in Japan, where traditional examples are known for their more formal designs, and in present day China, Vietnam and other south Asian countries where they are less formal, but may incorporate more of a landscape feel, with large rocks simulating mountains, pools of water and tiny ceramic figures called ‘mudmen’ (many of which are fishermen, or storks – a symbol of luck in the far east).

To do bonsai (which is also the plural word of the form – no “s” needed), especially in the northern hemisphere where tropical trees cannot stay outside in winter, and native species must, it is important to know what your environment offers, e.g. an outside space (preferably away from eyes of passersby), with room to display trees on benches, and/or to grow young ones in the ground for a few years to quickly fatten trunks – a major goal in bonsai development. If there is no reasonable outdoor place, then you can only grow tropical species, and they generally require supplementary lighting such as fluorescent fixtures, as well as ways to raise humidity in the room, achieved by more than a daily spray. Places like offices and dorm rooms are not ideal for growing as conditions are usually out of your control in terms of temperature and humidity, as well as being dark on weekends, so sometimes we have to put off growing for a time, but come back in a few years when you’re in control. 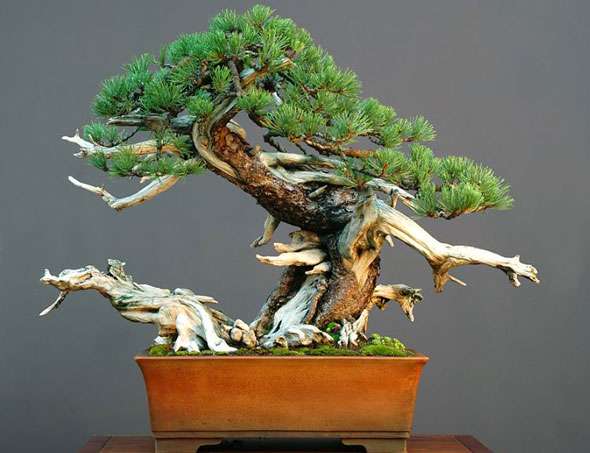 Bonsai are not “house plants” and won’t last long being treated as such. While trees will be found 99% of the time in regular “potting soil” whether you buy them at nurseries, the supermarket (a good source of tropicals you can grow into bonsai), or shopping malls, they’ll need to be repotted into fast draining grit, along with a small organic component in varying proportions depending on the species. This is so that water does not end up rotting tree roots, as happens all to often with peat, the main ingredient in potting soil. There are many types of grit available, some dependent on where you live for easy access, but not all.

Seasons are very important in bonsai, as temperate species need cold dormancy for winter months, being treated differently than they would be in spring or summer, and when it is ‘right’ to repot or transplant trees, and when it is not. While bonsai may be decorative, they are very much living things and should first and always be regarded as such rather than conversation pieces. A commitment of time above and beyond those given to house or garden plants is needed, and gifting bonsai is usually a bad idea unless you’re sure the person you’re gifting has the knowledge, time and interest in caring for them. It can take decades to produce a beautiful bonsai, weeks to finish it off through lack of care and experience, and leaving that care to well meaning friends on a temporary basis can also be problematic.

And for those of you who believe pruning is a highlight of bonsai care, possibly after watching “Karate Kid”, note that it is just one aspect of growing anything, not done just for its own sake, but to either remove or shorten branches, adding to a pre-planned design, or to stimulate new foliage growth in a particular place on the tree, as well as to periodically neaten the outlines. But dont take your tree home and just hack away – you may find the species does not ‘bud back’ lower on the remaining branch and end up with no look at all! The vast majority of good bonsai are first grown up a few years, then chopped back hard, leaving a mature looking trunk to grow new smaller branches, giving the illusion of a much older tree.

However, if you have the time, interest and vision to want to grow bonsai, and it doesn’t have to be hard, the rewards are terrific, and you’ll never be sorry!