Ever played backgammon? It’s a board game for only 2 people. Game pieces are moved around the board by roll of the dice. In order to win you must remove all of your game pieces from the board. While the dice add randomness to the game, decisions on moving the pieces around the board allow the player to consider different strategies. After the dice are rolled the player must decide which pieces to move where and plan for counter-attacks from their opponent.

Surprisingly backgammon dates back to nearly 3000 BC. The Egyptians and Romans both played board games very similar to backgammon. Then much later, from 1100 to 1600 the French and English began enjoying this favorite gambling pastime. Then in the early 1900s in New York the doubling cube was introduced to backgammon. The cube required players not only to select the best move in a given position, but also to estimate the probability of winning from that position, transforming backgammon into the expected value-driven game played in the 20th and 21st centuries. Now in the 21st century you can play backgammon online.

Obviously you want to be good at backgammon before you start betting the house and home on the game, but playing online can be a great addition to playing at home with friends. This particular backgammon site will be auctioning off Roman Greenberg’s famous shorts for an estimated $100,000. All the proceeds from the sale of the auction will go to benefit Arab and Jewish youth in distress. It’s actually a win-win for everyone involved. Before logging in to try your mind against other you better learn the rules. Maybe you were like me and had a backgammon board laying around in the attic, but just never knew how to play. 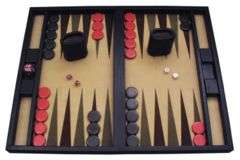 Setup: Each side of the board has 12 long triangles, called points. These points are considered to be connected across one edge of the board and form a continuous track in the shape of a horseshoe. Each point is numbered from 1 to 24. Each player begins with two checkers on point-24, three checkers on point-8, and five checkers point-13 and point-6. The two players move their checkers in opposing directions, each from point-24 toward point-1.

Points 1 through 6 are called the home board or inner board, and points 7 through 12 are called the outer board. The 7-point is referred to as the bar point, and the 13-point as the mid point.

Movement:
One die is rolled to determine which player will act first. Play is then alternated, rolling two dice at the beginning of each turn.

After rolling the dice a player must, if possible, move checkers according to the number shown on each die. For example, if the player rolls a 6 and a 3 (noted as “6-3”), she must move one checker six points forward, and another checker three points forward. The same checker may be moved twice as long as the two moves are distinct: six and then three, or three and then six, but not all nine at once. If a player rolls two of the same number, called doubles, she must play each die twice. For example, upon rolling a 5-5 she must move four checkers forward five spaces each.

In the course of a move, a checker may land on any point that is unoccupied or is occupied only by a player’s own checkers. It may also land on a point occupied by exactly one opposing checker; such a lone piece which is called a “blot”. In this case, the blot has been hit, and is placed in the middle of the board on the bar that divides the two sides of the playing surface. A checker may never land on a point occupied by two or more opposing checkers; thus, no point is ever occupied by checkers from both players simultaneously.

Checkers placed on the bar re-enter the game through the hitting player’s home board. A roll of 2 allows the checker to enter on the 23-point, a roll of 3 on the 22-point, and so forth. A player may not move any other checkers until all of her checkers on the bar have re-entered the game.

When all a player’s checkers are in her home board, she may start removing them; this is called bearing off. A roll of 1 may be used to bear off a checker from the 1-point, a 2 from the 2-point, and so on. A die may not be used to bear off checkers from a lower-numbered point unless there are no checkers on any higher points.

These are just the basics. Neither the doubling cube or backgammon strategy have been covered here. Hope you enjoyed this brief lesson in backgammon.