5 Parts of a Tobacco Pipe

A pipe is a very simple tool used to hold burning tobacco. The smoke released from the burning tobacco is then drawn through a small tube and into the pipe smokers mouth. As simple as a pipe seams there is an incredible amount of skill that goes into making a finely crafted pipe. The Indians of North and South America over the course of a thousand years were only able to craft crude pipes made out of stone or clay. However, the European craftsmen were able to perfect the art of pipes in only a couple of centuries. Below you will find a diagram of a pipe and the 5 different parts that make up a pipe.

Once a pipe is assembled, filled, and lit the smoke travels from the bottom of the bowl, through the shank, around the filter, through the stem, and into the mouth. The lip provides the mechanism to keep the stem from slipping from the mouth. The total design of the modern day pipe comes from years of trial and error and experimentation. 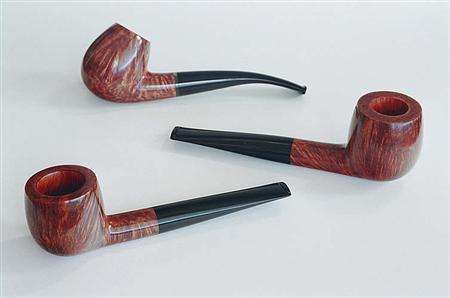 The Briar pipe is always the first choice of any pipe smoker. Briar comes from a tough little tree called Erica Arborea, which is a member of the heather family. It grows no more than 20 feet high, and would never be thought of as a premier pipe material. The burl, which pipes are made from, is found just under the ground. It’s not tree trunk nor roots, it’s actually the meeting place for the two.

Today nearly 30,000,000 tobacco pipes are manufactured across the world and the Briar Pipe is in reach of nearly every pipe smokers’ wallet. Ebay is an excellent place to find a great deal on a briar pipe, so check out their huge selection. 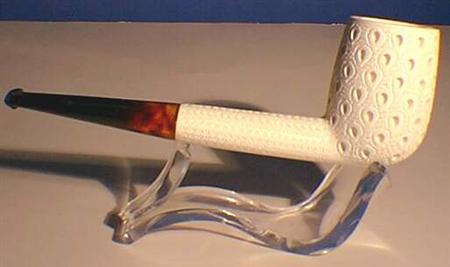 Meerschaum is a mineral that comes primarily from Turkey. This material is soft and easily shaped but wasn’t used as a pipe material until the discovery of tobacco. Its scientific chemical name is hydrous magnesium silicate and is thought to be remnants of prehistoric sea shells. Once the pipes are carved they must be dried and polished. Meerschaum’s are renowned for the cool, mellow smoke, and remain very popular today. Meerschaum pipes have quite a long break-in period, but the smoker is rewarded with a beautiful autumn brown pipe and a full ripe quality and flavor.

Corn Cob Pipe – Did you know that a small town in Missouri pumps out 15,000,000 corn cob pipes a year? The corn cob pipe industry has been supporting farmers since 1969. Farmers can sell the corn kernels then hand over the cobs to the pipe makers. The corn cob pipe is a great starter pipe since they are readily available and extremely cheap. Most pipe smokers prefer corn cob pipes only to the coveted Briar Pipe. 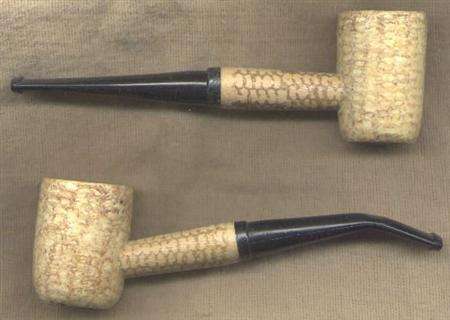