Does mingling in the water with say, 30 tiger sharks, and videotaping the acts of these awesome creatures sound like the experience of a lifetime? Welcome to the thrilling world of SCUBA diving! SCUBA diving has attracted the attention of thousands of thrill seekers, spear fishers, and average joes alike. There’s little to fear from this amazing sport, and will create experiences you’ll never forget.

Through the ages, divers have performed many vital tasks. The original divers, those of the BC era, dove to obtain food and precious pearls. During times of war, navies would use divers to drill holes into the bottom of a boat, hoping to sink it. These same divers also built underwater defenses to help protect the shores of their land from naval landing parties.

When technology improved an air could be delivered underwater, divers began to explore old ship wrecks and bringing up buried treasures that lie beneath the surface. Now that they could spend longer amounts of time underwater, large passenger and warships could be built right in the water. In the 19th century, after the first decent masks were made, scientific studies and water exploration ventures began. Today, underwater building and recreational diving continue, now that the opportunity to learn to dive is obtainable for almost everyone. 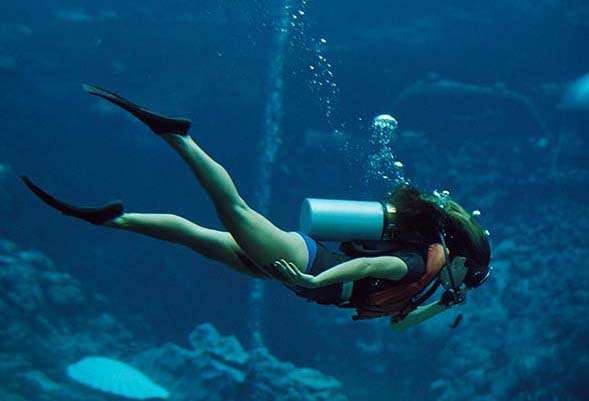 Mechanisms for breathing underwater have been tested and used for hundreds of years. The first divers trained themselves to hold their breath for long periods of time, some up to 7 minutes. Soon, some started bringing air with them. In 1535, the first diving bell was created. This bell had an air chamber inside that could be submerged in water. When divers needed to take a breath, they popped their head into the bell, drew a breath, and continued their dive. In the mid 1800’s, the first portable breathing apparatus’ were created. Diving helmets were air tight chambers that could fit around the head. Air was pumped up from the surface and into the helmets, allowing the diver to breathe.

As time went on, lighter, more mobile gear was created. Modern SCUBA diving took its roots later in the 19th century when the “air belt” was invented. The air belt was a self contained unit that allowed a diver to take oxygen with him wherever he went. No lines connected him to the surface. Along with the belt, other SCUBA equipment developments occurred. Masks were improved to increase visibility, fins helped a diver maneuver in the water much quicker, and heavy diving helmets were made obsolete by the air regulator. Today, divers enjoy the benefits of these many years of SCUBA developments.

So how do you get into the sport of scuba diving? What equipment does diving require? What types of water can you dive in? This scuba diving guide will answer those questions, along with many other aspects of the sport of SCUBA diving.