What is Pinch Strength?

pinch strength (n): The ability of the thumb to apply force inward towards the palm.

If you’re like me, you’ve never even heard of pinch strength. However, in the following article you’ll learn what you can do with excess amounts of pinch strength, how to train for pinch strength, and where you can learn more about this amazing display of strength. Adding a pinch strength exercise to your strength training regimen will also give you a hefty advantage in several different daily applications and take your grip strength to new levels. 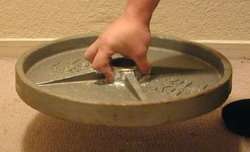 What can I do with excess amounts of Pinch Strength?
If you’re an avid rock climber or into bouldering you probably already know that pinch strength is the backbone to the pinch grip. If you want to amaze your friends you’ll be able to tear a telephone book in two with ease. Progress a little further and you’ll be able to rip a deck of cards in half. The elite among pinch strength enthusiasts are able to lift a blob or a 45-lb York plate by its hub.

How do I train for Pinch Strength?
In the strongest of pinch grips the first knuckle of the thumb is completely extended or slightly bent. The majority of the inward force is generated by the large muscle of the lower palm just beneath the second knuckle. This force is balanced by one or more fingers of the same hand applying a force back towards the thumb. Unless you want to start a civil war in your hand I would advise you to place an object between your thumb and fingers when exercising this type of strength. 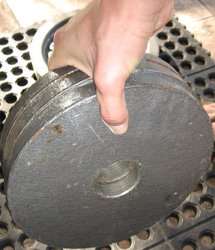 Plate Squeeze:
Start out with a pair of 10lb Olympic plates placed side by side and smooth sides out. Rub some climbers chalk on one hand and the plates to counteract any moisture. Squeeze and Lift. This exercise should be performed over a soft surface should you happen to drop the plates at any point. Watch your toes! If you are successful, give three or four a try and then switch to two 25lb plates. When you can manage the 25 plates with one hand, you have developed decent pinch strength. 35lb plates are considered exceptional, 45lb plates â€“ world class.

Block Weights:
One half of a hexagonal or York-style dumbbell, block weights are praised by many to be the ultimate training tool for all around hand strength. They are formed by using a hack-saw or Sawzall to cut then ends of a dumbbell and then a file to smooth out the plane the handle used to connect to. To train, one hand is placed directly over the weight with the thumb making contact with one side and the four fingers the other. Squeeze and Lift. A 25 pound block weight (One half of a 50 lb dumbbell) is a good starting point for beginners. The block weights become larger in size as their poundage rating increases making them harder to lift than a normal linear progression. Additionally, weights can be strung horizontally across the top to increase the difficulty without increase the size of the size of the grip. 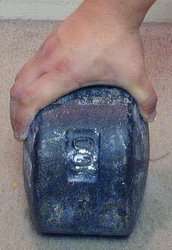 Blob:
The Blob (shown right) is one half of a 100 lb old school York dumbbell. Approximately fifty pounds and over 4 inches wide, it was made popular as a strongman feat of strength by Richard Sorin in the seventies.

Olympic Plate Hub:
Once again the York Barbell Company has its foot in the grip domain unintentionally. The hub of an Olympic plate is the center circular ring whose sides can be grasped in a pinching manner. The picture at the beginning of the post shows a 45-lb plate being picked up by its hub. This is considered to be a near impossibility by most.

Hub Pinch Grip:
IronMind, see link below, manufacturers a hub pinch grip than can be attached to a loading pin to progressively load it. This gives us the ability to train up to this ridiculous display of strength.

Pinch Block:
For those of us who canâ€™t manage the above feats, a pinch block gives us a way to systematically train our pinch strength by loading progressive amounts of weight on to a loading pin and attached the block with a carabiner.

Where Can I Learn More?
Hopefully this guide has given you some quick exercises you can do to increase your pinch strength. It’s really something you can add to your daily exercise routines. Perhaps I’ve intrigued you enough to go hardcore. In that case you’ll need a few links to be on your way.

Grip Board: The holy grail of grip strength, members worldwide use this as a resource in communicating their efforts of taking this underground craft to new limits.

Diesel Crew: A particular bunch who are among the strongest in the world.

Iron Mind: A company who makes all kinds of grip strength equipment.

Lifting the Blob: Self Explanatory