Although ballroom dancing can be traced to the 18th century when royalty entertained themselves with large balls and intricate dance steps, the world of modern ballroom dancing began in the early 20th century with the establishment of the Imperial Society of Teachers of Dancing (ISTD) in 1904. Its task as an educational charity is to teach dance, encourage knowledge, distribute information about recent techniques and to set the standard for proper instruction. As a result of this organization, dance moves in ballroom dancing conform to a standard which requires the dancer to pass several tests before becoming a master. For example, the closed hold requiring couples to maintain contact in five areas is common to all ballroom styles no matter the aesthetics or rhythms of the particular dance.

There are other controlling organizations such as the World Dance Council Ltd (WDC) begun in 1950 in Edinburgh, Scotland. Its objective is to provide the organizational structure for holding world championships in competitive ballroom dancing. Having achieved its objective, the WDC is now the leading authority on competitive dance all over the world. It is not, however, the only international organization. There is also the International Dance Sport Federation (IDSF) which provides essentially the same structure for amateur dancers. 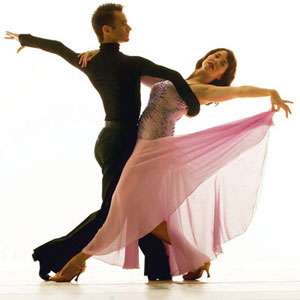 The ISTD authorizes ten dances of International Ballroom and International Latin dances. They are Waltz, Quickstep, Tango, Foxtrot and the Viennese Waltz as well as the Cha-Cha, Rumba, Samba, Jive and Paso Doble. Sometimes sequence dancing from the United Kingdom is included under the umbrella of ballroom dancing as is American Smooth and American Rhythm, but the first ten are the basics.

The Waltz or the Slow Waltz is danced to 84 to 90 beats per minute with the first beat of the measure accented and is in three-quarter time. The basic figures are one step per beat or three steps per measure. This dance is marked by a pendulum swing in body motion with feet parallel, and a rise and fall in the sway of the body. The name comes from a German word “walzen” which means to roll, turn and glide. A faster version of the dance is called the Viennese Waltz.

The Quickstep is sequenced in a 4/4 beat at 50 bars per minute. It was developed in New York during WWI by Caribbean and African dancers with intense movement including hops, runs, very quick steps and a lot of rotation. Its tempo is fast and is often danced to jazz or ragtime. Sometimes call the “joy” dance because of the fast tempo and fast rhythms, it has evolved in complexity since its inception and now uses syncopated steps of eighth note length.

The Tango seems to have evolved from the influences of a number of immigrant cultures in Buenos Aires in the early 1900s. Tango music was intensely popular in Argentina around 1910 generating dance teams and musicians who traveled to Europe and initiated the first tango craze in Paris in that year. Its popularity quickly migrated to London and other European capitals and by late 1913 it hit New York City. Tango had declined in Argentina for political reasons until it became a matter of national pride around 1930 under the government of Juan Peron.

The origin of the Foxtrot is unclear although vaudeville actor Harry Fox seems to get the credit in 1914. In this dance the partners face one another in a classic position, the man moves forward and the woman moves backward in 4/4 time (four beats to a measure) emphasis on the first and third beats. It was originally done to ragtime, but now is usually accompanied by big band music and swing.

The International Latin dances include the energetic, saucy Cha-Cha; the Rumba, alternately called the “dance of love,” a slow dance of 120 beats per minute; and the Samba which is of Brazilian genesis and has many jumps and turns. The Samba is a very fast dance and is very difficult to learn. The last two major categories of International Latin dances are the Paso Doble which literally means “two step” in Spanish. It is almost a march and has little hip movement which is unusual for Latin dances. And, finally, Jive which is the Spanish variation of the Jitterbug and is known as a country dance.

For a more in-depth discussion of the very complex subject of ballroom dancing consider the following sources: Teach Yourself Ballroom Dancing by Craig Revel Horwood; The Ballroom Technique by Alex Moore; Technique of Latin Dancing by Walter Laird; www.ballroomdancers.com; and for an additional listing of sources try http://wotan.liu.edu/home/mgde/web.html. Here is a potential hobby with a wonderful history which will contribute to your social skills, your happiness and your health. Go and enjoy!