Who’s ever heard of card stacking? If you try to google it you’ll only find discussion based on propaganda. Anyways, I’m sure we’ve all tried once or twice to build a little pyramid, but they usually always end the same way. Just a big pile of cards, but check out what Bryan Berg of CardStacker can do. 😯

How many cards you ask? 78,000. That’s nearly 250 pounds of playing cards in this 25ft card tower. It took him nearly 2 and a half weeks to build this tower which is no longer the tallest tower he’s ever built. He also insists that an even larger tower could be built with enough time and patience.

The natural question everyone asks is “How does he do that?” The basics to all his building is the same. It’s structures he refers to as grids. If you want all the gory details in his book available on amazon.

Bryan’s second Guinness World Record is equally impressive. He spent over a month recreating Cinderella’s castle at Walt Disney World in Orlando FL. He used an astonishing 152,000 cards, nearly twice as many cards as the 25 ft tower. The structure is 14 feet square and 14′ tall.

Bryan’s not just a card stacker. In 2004 he earned his Master of Design Studies from the Harvard Graduate School of Design. Not to mention his undergraduate studies in the Department of Architecture at Iowa State University.

With that said take a look at Bryan standing in front of Cinderella’s castle. The next time you’re playing poker try to stand a couple cards on end and build a little pyramid. As for me, I’m seriously considering purchasing Bryan’s book to build myself a little fortress. 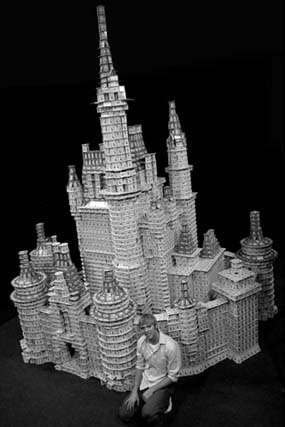